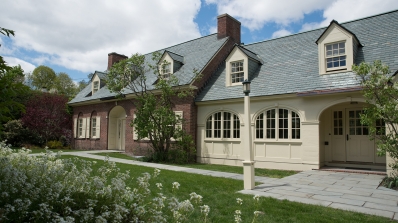 About the Montgomery House

One of the amenities of the Montgomery Fellows Program is to provide our visitors with a comfortable and spacious residence. In the fall of 1977, shortly after its establishment, the Endowment was able to acquire the handsome and gracious home of Fanny Hazen Ames.

The Ames House was ideal, both in size and arrangements, as well as in its location. Overlooking Occom Pond, the residence is situated within reasonable distance of campus. To serve its new purpose, it needed very little remodeling, but it did require redecoration throughout that Harle Montgomery herself took on.

The house was built in 1924 for Adelbert Ames Jr. (1880-1955), professor at the Department of Physiological Optics since 1919. Ames later turned the department into the famous Dartmouth Eye Institute, and served as its research director until his retirement. Ames is best known for his pioneering work in binocular vision, optical illusions, and visual perception, which manifested itself in the design and construction of the eponymous Ames room, the Ames window, and the Ames chair.

The house was designed by Larson & Wells, an architectural firm established by Jens Frederick Larson, the college’s architect, and Henry Artemas Wells, the superintendent for the college’s real estate. Larson, the architectural mastermind behind Dartmouth’s long cherished Georgian style, served as advisor to the Association of American Colleges, and was as such an authority in designing a campus.