Alanis Obomsawin, a Canadian filmmaker, is a member of the Abenaki, a Native American Tribe and First Nation. The focus of her life’s career as been standing up for the sovereign rights of First Nations peoples, and she has done so as a singer, storyteller, filmmaker, printmaker, and social activist. Since 1967, as a staff member of the National Film Board of Canada in Montreal, Obomsawin has made over twenty internationally acclaimed films and thirty documentaries. From Edmonton to James Bay, from Montreal to New Brunswick she has filmed—with passion, empathy, compassion, and fairness—the acts of resistance by which Native tribes, like the Cree, the Abenaki, the Mi'kmaq, and the Mohawk, have struggled to proclaim their ancient rights to land and water against efforts by the federal and provincial governments to annul those rights.


In order to make her most famous and most honored film—Kanehsatake: 270 Years of Resistance (1993)— Obomsawin lived among the Mohawk activists who in 1989, to protest the construction of a golf course on their sacred land, stood their ground for seventy-eight days against the provincial police of Quebec and then the Canadian army. The film won the award for the "Best Canadian Feature Film" at the 1993 Toronto Film Festival.

Other awards include being named a Grand Officer of the National Order of Quebec, lifetime achievement awards from Montreal-based arts peace advocacy group, Les Artises pour la Paix, and Chile’s Valdivia International Film Festival, the Humanitarian Award for Exceptional Contributions to Community & Public Service from the Academy of Canadian Cinema & Television, the International Documentary Association’s Pioneer Award, a Birks Diamond Tribute to the Year’s Women in Film at the 2013 Toronto International Film Festival, the Canadian Native Arts Foundation National Aboriginal Achievement Award, and the Outstanding Contributions Award from the Canadian Sociology and Anthropology Association, which was the first time that the organization honored someone outside the field of sociology and anthropology. The Canadian government also honored her with its highest award, the Order of Canada. Additionally, Obomsawin was named an Honorary Fellow of the Royal Society of Canada, named to the Playback Canadian Film & Television Hall of Fame, honored with a retrospective of her work at the Museum of Modern Art in New York City, and is the subject of the first-ever book on Native filmmakers, Alanis Obomsawin: The Vision of a Native Filmmaker, by Randolph Lewis.

In recognition for her outstanding work and activism, Obomsawin has received several honorary degrees, including ones from York University, Concordia University, Carleton University, the University of Western Ontario, University of British Columbia, and Dalhousie University. In 2013, Obamsawin also received an honorary doctorate from Dartmouth College, as part of the 40th anniversary celebration of its Native American Studies department.

During her Montgomery Fellowship, Obomsawin taught a film studies course entitled “Documentary Film: Are We Listening?” during which each of her students got to make a short film. She also delivered a public lecture, and hosted a screening of her film, Professor Norman Cornett: “Since when do we divorce the right answer from an honest answer?” which was followed by a discussion. 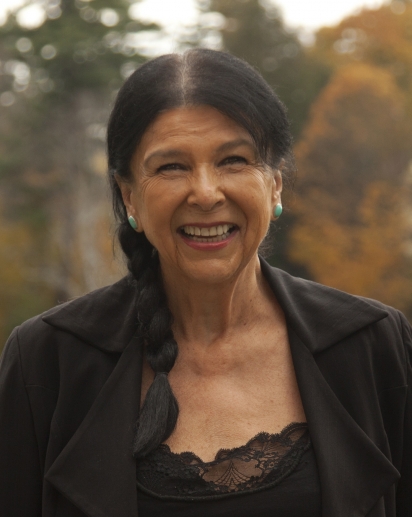