Bobby McFerrin is an American musical innovator, composer, conductor, and virtuosic a cappella singer with a four-octave vocal range. He has won 10 Grammy Awards, four of which were for Best Male Jazz Vocal Performance. His many albums include Don't Worry, Be Happy (1988), Simple Pleasures (1988), Medicine Music (199)), Paper Music (1995), and Beyond Words (2002). McFerrin is perhaps best known for his 1988 hit song, “Don’t Worry, Be Happy” which reached the No. 1 spot on U.S. pop charts and won Song of the Year at the 1989 Grammy Awards. While McFerrin has recorded numerous solo albums, he has also collaborated with other artists like Herbie Hancock, Yo-Yo Ma, and Chick Corea, and has served as the guest conductor for a number of symphonies across the U.S. and around the world.

In addition to performing, McFerrin contributes to music education by working with a variety of music education program and volunteering as a guest music teacher and lecturer for public schools around the U.S.

McFerrin’s Montgomery Fellowship was part of a series on the arts that began with writers Grace Paley and Robert Nichols. While on campus, McFerrin performed at the Hopkins Center for the Arts (HOP), conducted a coaching session with the Dartmouth Chamber Singers, and engaged with students and faculty in a variety of settings. Since then, McFerrin returned to campus twice to perform at the HOP in 2014 and 2016. 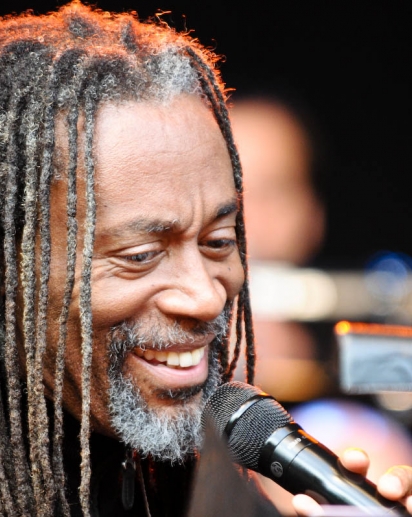