Desmond Tutu is one of the world’s most important social justice advocates. From South Africa, he is a now retired Anglican bishop who is best known for his work against apartheid. Tutu was the first ever black Archbishop of Cape Town and bishop of the Anglican Church of South Africa. Since the end of apartheid, he has remained an active spokesperson for social justice and human rights around the world, speaking out about HIV/AIDS, poverty, racism, sexism, climate change, transphobia, and homophobia.

Tutu’s own daughter, who is also a priest, married another woman in 2015 and had to end her work in South Africa because of the church’s beliefs on homosexuals in the clergy. Tutu has said that his feeling toward LGBTQ equality is the same as it was toward apartheid.

Tutu has received numerous honors and awards including the Nobel Peace Prize, the Albert Schweitzer Prize for Humanitarianism, the Sydney Peace Prize, the Gandhi Peace Prize, and the Presidential Medal of Freedom. Tutu also led the Truth and Reconciliation Commission under President Nelson Mandela as well.

During Tutu’s Montgomery Fellowship, he delivered a lecture titled “Crying into the Wilderness: A Struggle for Justice in South Africa,” during which he told the story of his involvement in the end of apartheid. He also visited classes and engaged with students about a number of global causes. 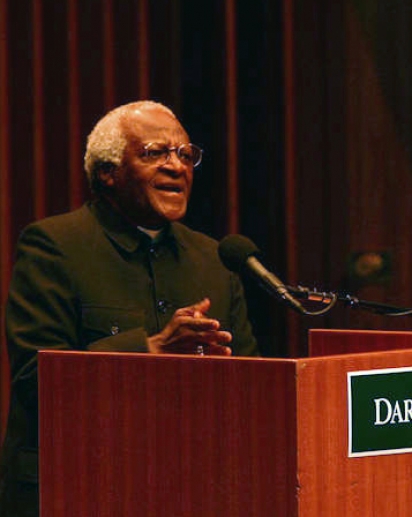