Doris Kearns Goodwin is an American biographer, historian, and political commentator. She taught at Harvard University as a professor of government for ten years and has authored biographies of multiple U.S. presidents, including The Fitzgeralds and the Kennedys: An American Saga, Team of Rivals: The Political Genius of Abraham Lincoln, The Bully Pulpit: Theodore Roosevelt, William Howard Taft, and the Age of Journalism, Lyndon Johnson and the American Dream, and No Ordinary Time: Franklin and Eleanor Roosevelt: The Home Front in World War II, for which she won the Pulitzer Prize. For a time, Goodwin also worked as Assistant to President Lyndon Johnson during his last year in office and later assisted him in preparing his memoirs. In addition to her work on the page, Goodwin has appeared on PBS, in PBS documentaries on Lyndon Johnson, the Kennedy family, Franklin Roosevelt, and Ken Burns’ documentary Baseball. In addition to the Pulitzer Prize, Goodwin has earned the Lincoln Prize for her book Team of Rivals: The Political Genius of Abraham Lincoln, and the New York Historical Society’s inaugural American History Book Prize. Goodwin has received honorary degrees from Bates College, Westfield State College, and Dartmouth College. In addition to her degree from Dartmouth, Goodwin gave the Commencement address as the college celebrated its 25th Anniversary of co-education. During her time as a Montgomery Fellow, Goodwin was part of a lecture series featuring presidential biographers about the power of the U.S. presidency. 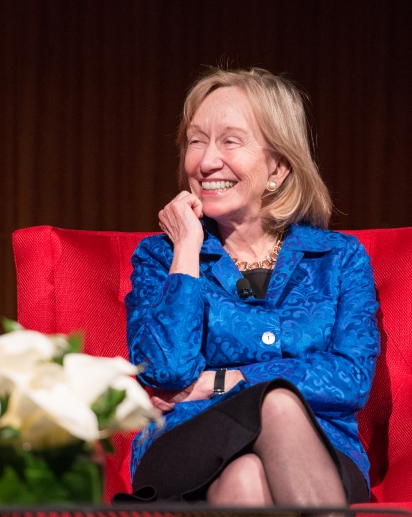