Freeman Dyson is an English-born physicist and mathematician, who worked mostly in the U.S., and is best known for his work in quantum electrodynamics, solid-state physics, astronomy, and nuclear engineering. He is currently retired and professor emeritus at the Institute for Advanced Study (IAS) in Princeton but spent most of his life as a professor of physics. Dyson began his teaching career at Cornell University, where he researched nuclear reactors, astrophysics, and ferromagnetism, among other topics. In 1953, Dyson moved to the IAS to teach physics and continue his research. During the course of his career, Dyson has achieved renown as a scientist and writer and has become a living bridge between them, helping the scientist and the nonscientist to understand each other better. He has also lectured widely and written extensively about science for the general public. Some of his books include, Disturbing the Universe, Weapons and Hope, Origins of Life, Infinite in All Directions, and From Eros to Gaia. In recognition of his efforts and achievement in nuclear energy, President Bill Clinton presented Dyson with the Enrico Fermi Prize in 1994. Dyson is a fellow of both the American Physical Society and the Royal Society of London and is a member of the U.S. National Academy of Sciences. In addition to the Enrico Mermi Prize, Dyson has received the Templeton Prize for progress in Religion and the Henri Poincaré Prize from the International Mathematical Physics Congress. 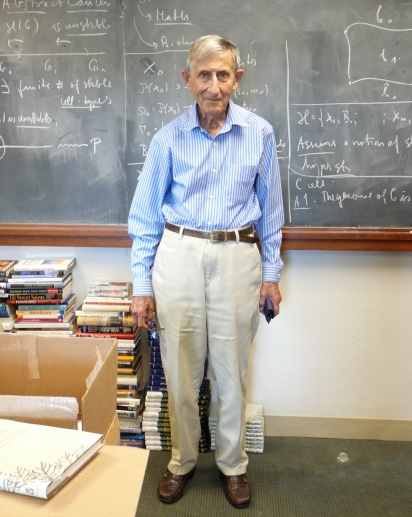