Githa Hariharan is an Indian author and editor who has lived and worked in several places around the world. Her first novel, The Thousand Faces of Night, won the 1992 Commonwealth Writers Prize. Since then, she has published many items including the short story collection, The Art of Dying, the novels, The Ghosts of Vasu Master, When Dreams Travel, In Times of Siege, Fugitive Histories, and the collection of essays, Almost Home: Cities and Other Places. She has also edited A Southern Harvest, a volume of stories in English translation from four major South Indian languages, and, with co-editor Shama Futehally, the collection of stories for children titled, Sorry, Best Friend! Three of her novels have been nominated for major awards, including the Booker Prize, and In Times of Siege, was shortlisted for the Commonwealth Writers Prize. Hariharan’s work has been translated into French, Spanish, Italian, Dutch, Greek, Urdu, and Malayalam, and her work is frequently included in anthologies.

Hariharan, joined by historian Romila Thapar, came to Dartmouth has part of a Montgomery Endowment initiative to enhance learning opportunities around international issues, particularly those related to South Asia. Both women taught an undergraduate course in their respective fields, which combined to form a series called, “Reimagining India.” Hariharan’s English course was titled, “The Edges of Nation-Making: Perspectives on Modern Indian Literature.” In addition to teaching, Hariharan delivered the public lecture, “In Search of Our Other Selves,” and met with students and faculty in a variety of other settings on campus. 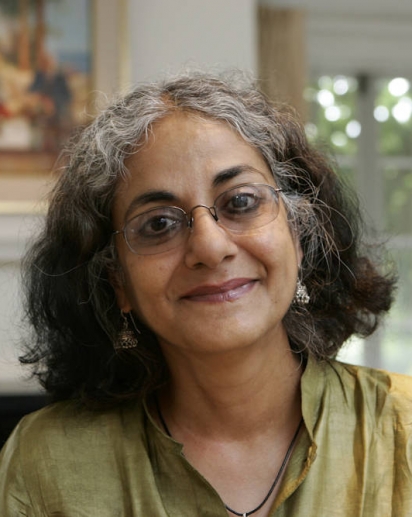