Joan Didion, novelist, essayist, journalist, and screenwriter, has spent her life observing the country's cultural and political landscape with what John Leonard called "her sonar ear, her radar eye."

She is the author of five novels, 10 books of nonfiction, five screenplays, one play, and several essays and book reviews. Her work tends to explore the erosion of both morals and social ties. In 2005, Didion won the National Book Award for The Year of Magical Thinking, a poignant memoir of her grief following the sudden death of her husband, the writer John Gregory Dunne. Didion has also received the National Book Foundation’s Medal for Distinguished Contribution to American Letters, the Evelyn F. Burkey Award from the Writers Guild of America, the National Medal of Arts and Humanities presented by President Barack Obama, and honorary doctorate degrees awarded by Harvard and Yale.

It was after the publishing of her memoir that Didion visited Dartmouth for her Montgomery Fellowship, during which she read and discussed her work and engaged with professors and students about the writing process and having a literary career.

Dartmouth’s Donald Pease, Jr., the Avalon Professor of the Humanities and Professor of English who served on the committee that selected Didion for the fellowship, said: “Joan Didion is a public intellectual whose work bridges the imagined divide separating the most challenging questions of our time.” 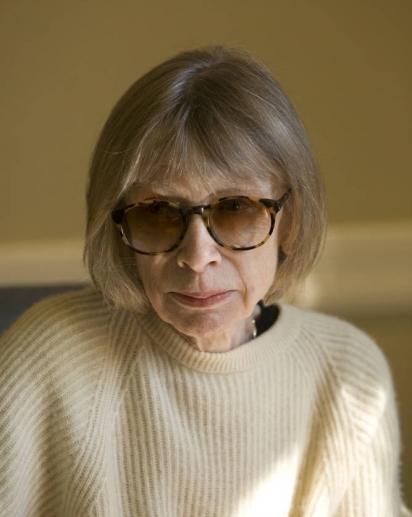