John Hope Franklin was an award-winning American historian who wrote extensively on and advocated for blacks in the United States. Franklin’s career spanned several decades and included work for the NAACP Legal Defense Fun during the Brown vs. Board of Education Supreme Court case in the 1950s, service to a number of organizations and educational institutions, and several published works. His books include From Slavery to Freedom, The Militant South, 1800-1861, Race and History, and Racial Equality in America, which is the published lecture series he delivered for the National Endowment for Humanities sponsored Jefferson Lecture. Franklin’s autobiography, Mirror to America: The Autobiography of John Hope Franklin received the Robert F. Kennedy Center for Justice and Human Rights Book Award. In 1995, Franklin was awarded the Presidential Medal of Freedom, the U.S.’s highest civilian honor, by President Bill Clinton. More than a decade later, Franklin received the John W. Kluge Prize for lifetime achievement from the Library of Congress for his work in the study of humanity. During his career, Franklin also received the St. Louis Literary Award, the NAACP’s Spingarn Medal, the Chicago History Museum’s “Making History Award” for Distinction in Historical Scholarship, and the Bruce Catton Prize for Lifetime Achievement from the Society of American Historians. Franklin was also inducted into the Oklahoma Hall of Fame and received an honorary degree from Lafayette College.

Franklin served as the former president of Phi Beta Kappa, the Organization of American Historians, the American Historical Association, the American Studies Association, and the Southern Historical Association. He also was a member of the board of trustees at Fisk College, the Chicago Symphony Orchestra Association, and the Chicago Library. Franklin’s long teaching career included stints at Fisk University, St. Augustine’s College, North Carolina Central University, Howard University, Brooklyn College, where he served as Chair of the History Department, the University of Chicago, where he also served as Chair of the History Department, Duke University, and Duke University Law School. When he was selected for department chair at Brooklyn College, he was the first person of color to head a major history department in the U.S. Franklin also served as visiting professor at the University of Cambridge. 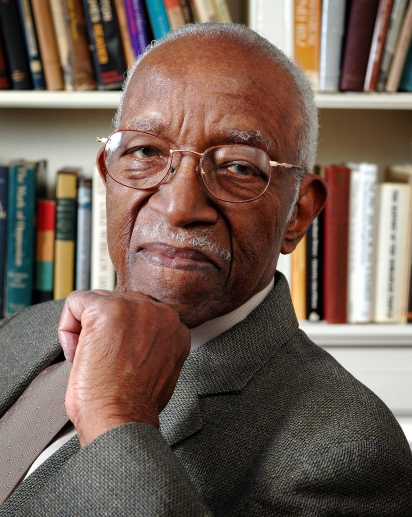