As a cartoonist and graphic artist, Larry Gonick is a pioneering science and social science communicator best known for his various “Cartoon Guides” and “Cartoon Histories”, most notably The Cartoon History of the United States and the all-encompassing multivolume Cartoon History of the Universe (volume III was recognized with a Harvey Award – the “Oscar” for comics and cartoons, so to speak). His “Cartoon Guides” to statistics, algebra, calculus, computer science, physics, and chemistry, to name only a few, have become classics in the world of science, technology, engineering and mathematics. His Cartoon Guide to Genetics was among the earliest and most accurate modern introductions to the subject written for a broad audience and serving a generation of biology students as a study guide to the field. A Harvard graduate in mathematics with a broad interest in adjacent fields and beyond, Larry Gonick is considered “the most well-known and respected of cartoonists who have applied their craft to unraveling the mysteries of science”.

At a time of rethinking pedagogy and new ways of teaching, paired with the copious emergence and popularity of graphic novels, comics, and cartoons, Larry Gonick’s work occupies an important space between textbook and popular exposition, a hybrid art form that is not a reduction as much as it is a distillation of science at a level of accuracy. Gonick’s books are often assigned reading in college and high school classes. With his eye-catching and joyful graphics, along with precise but “human” explanations, his science books achieve a level of effectiveness that most lecturers still aspire to. They are truly classics of expository writing and communication.

The Dartmouth community warmly welcomes him as Montgomery Fellow, winter 2018! 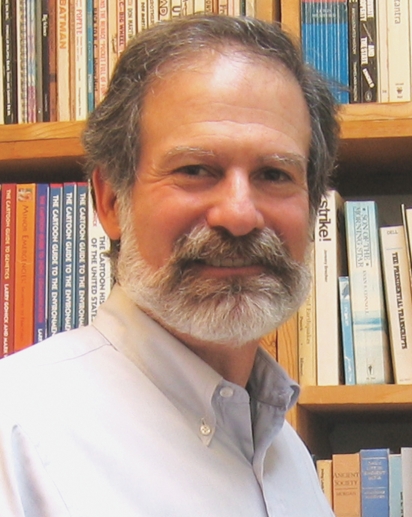