Larry Kramer is an American playwright, author, public health advocate, and LGBT rights activist. He began his career working as a screenwriter for Columbia Pictures and earned an Academy Award nomination for his 1969 screenplay, Women in Love. His novel Faggots, a cautionary and no-holds-barred satire about gay life-style in Manhattan and Fire Island, was published in 1978 to praise but also to withering criticism by gay and straight readers. Although controversial at the time and, as it turned out, prescient in foretelling the catastrophic "plague years" that were soon to come, Faggots remains one of the best-selling gay novels ever published. In 1985, The Normal Heart, a play about the beginnings of the AIDS epidemic in New York and the indifference and blindness, with which the American health care system, government agencies, corporations, public officials, the media, and the population in general dealt with the crisis, opened to rave reviews. Named one of the "Hundred Best Plays of the 20th Century" by the Royal National Theatre of Great Britain, The Normal Heart has been produced around the world; its revival on Broadway in April 2011 won a Tony award. The Destiny of Me, a sequel to The Normal Heart opened in 1992 and won two Obie awards and was a finalist for the Pulitzer Prize.

In addition to his fictional work and his writing for the stage, Larry Kramer has been the most vocal advocate, polemicist, essayist, organizer, and protestor for gay rights in America. He co-founded the Gay Men's Health Crisis (GMHC), which has become the world's largest private organization assisting people living with AIDS. The demonstrations and civil disobedience of ACT UP (AIDS Coalition to Unleash Power), which he founded in 1987, and Mr. Kramer's enraged, often willfully offensive, lectures and newspaper articles helped to change the way medicine is practiced in the United States.

While on campus, Kramer met with students and faculty in classes and at meals, participated in a public dialogue with Professor Michael Bronski from the Women’s and Gender Studies Department, and joined courses in the Department of Theater as well as others that focus on global health, social justice, rhetoric, and politics. 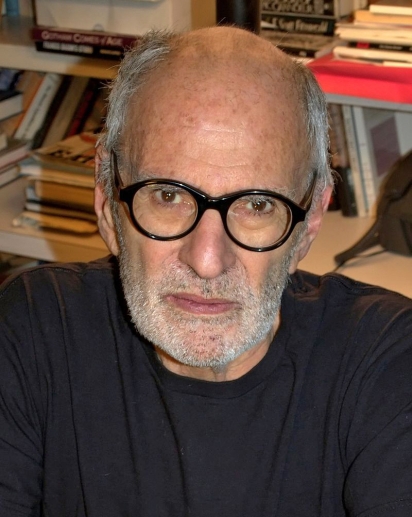