Lech Walesa served as Poland’s second president but is best known for being the labor activist who sparked the infamous Lenin Shipyard strike in Gdansk, Poland, in 1980. Christened “Solidarity,” the strike became a social revolution within the Soviet Union. An electrician by trade, Walesa fought for trade unions and was often persecuted by Communist forces for his activism.

In 1983, Walesa won the Nobel Peace Prize, and in 1990, he was elected to the Polish presidency. During his time in office, he helped Poland transition away from communism and set Poland firmly on the path to becoming a free-market democracy. Walesa made Poland a model of economic and political reform for the rest of Eastern Europe to follow and earned it the honor of receiving one of the first invitations to join an expanded NATO.

In addition to his Nobel Peace Prize, Walesa has earned numerous awards and honorary degrees in recognition of his activism in Poland and abroad. Some of these awards include the United Kingdom’s Order of Bath, Germany’s Order of Merit, France’s Legion of Honor, and the European Union’s European Human Rights Prize. He was named Man of the Year by Time magazine, The Financial Times, The London Observer, Die Welt, Die Zeit, L’Express, Le Soir, and several other publications. Walesa has also been awarded more than 45 honorary degrees by colleges and universities all over the world, including Harvard University and the Sorbonne. Cities all over the world have named Walesa an honorary citizen. In 1989, Walsea was the inaugural recipient of the United States’ Liberty Medal, and won the Presidential Medal of Freedom, the highest civilian award given in the United States.

Walesa now heads the Lech Walesa Institute, whose aim is to advance the ideals of democracy and free market reform throughout Eastern Europe and the rest of the world. He also continues to travel around the world, speaking to a variety of audiences about politics and social issues. 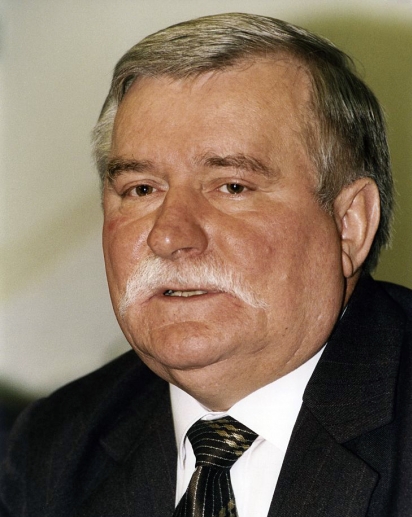