Sculptor and ceramicist, Magdalene Odundo, was born in Kenya and educated in India, Kenya and the Royal College of Art in the UK. Using techniques from the ancient world and influences from traditional African and Native American pottery, Odundo creates handmade forms that have been shown in museums and galleries around the world—including Dartmouth’s own Hood Museum of Art. Her work blends the traditional and the modern and reveals her mastery of using clay as a medium. Her clay pots are elegant, powerful, playful, and sensual, and she remains one of the most revered ceramicists in the world.

For her accomplishments and contributions to the world of ceramics, Odundo was awarded the African Art Recognition Award by the Detroit Art Institute in 2008. In that same year, she also was appointed Officer of the Order of the British Empire in the Queen’s Birthday Honour’s List for services to the Arts. Soon after, Odundo became a patron and trustee of the National Society for Education of Art & Design (NSEAD). She also serves on the British Council Art Advisory Panel and is a member of the Royal College of Art Council. In 2012, Odundo earned the African Heritage Outstanding Achievement in the Arts in Kenya, and in 2014, she received an Honorary Doctorate from the University of Florida.

In addition to her work, Odundo is a committed teacher. After teaching at the Commonwealth Institute in London, the Royal College of Art, The Surrey Institute of Art & Design, University College, and the University for the Creative Arts (UCA) and its Crafts Study Centre at Farnham, UK, where she now is professor emerita. She has also served as the artist-in-residence at several colleges and universities including Dartmouth, which welcomed her in 2008.

Glass has been her focus during the last few years, and she has done residencies at Museum of Glass in Tacoma, Washington; Pilchuck Glass Summer Workshops; and the National Glass Centre at the University of Sunderland, UK. Despite her work with glass and other exhibitions featuring bronze, print, drawing and photography, Odundo’s focus remains ceramics. 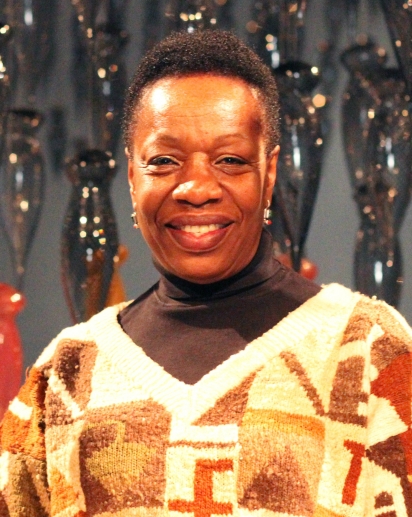