Mary Robinson, the first woman President of Ireland and formerly the United Nations High Commission for Human Rights has spent most of her life as a human rights advocate. She is the superb example of a politician who puts her humanity very much at the forefront of her politics and, for that, she received many medals, including the Presidential Medal of Freedom from President Barack Obama in 2009, the highest civilian honor in the U.S., and Amnesty International’s Ambassador of Conscience Award in 2004. She has also received the “Outspoken” Award by the International Gay and Lesbian Human Rights Commission and the Sydney Peace Prize.

After leaving her post at the UN, Robinson created Realizing Rights: the Ethical Globalization Initiative, which focused on equitable trade, promoting the right to health, humane migration policies, corporate social responsibility, and strengthening women’s leadership. After this organization ended, Robinson created the Mary Robinson Foundation – Climate Justice, where she is president and chair of the board. Robinson has also served shorter terms in the following positions: UN Secretary-General Special Envoy to the Great Lakes of Africa, UN Secretary-General Special Envoy on Climate Change, and as a special envoy on El Niño and Climate. She is also a member of the Elders, the Club of Madrid, and the Royal Irish Academy, and the former Chair of the Council of Women World Leaders.

Robinson currently serves as Chancellor of the University of Dublin and also has taught at Columbia University where she offers a class on international human rights. She also travels around the world to deliver lectures and has received honorary degrees from several institutions, including University of Cambridge, McGill University, the University of Bath, and Brown University.

During her time as a Montgomery Fellow, she delivered the lecture, “Making Human Rights the Compass” and engaged with the Dartmouth community in a variety of other ways. 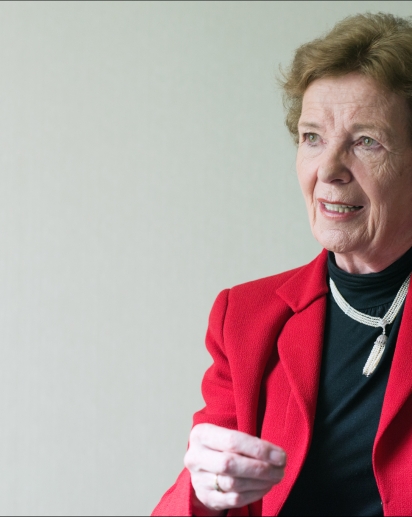