Williams, who was previously a Montgomery Fellow in 2006, will be in residence from January 4 through March 10 and will teach an environmental studies writing course. She will also give a public lecture on “Writing Our Way Home” in the Tuck School’s Cook Auditorium on Monday, January 25 at 4:30 p.m. Christo, who is best known for “wrapping” environments in collaboration with his late wife Jeanne-Claude, will deliver a Montgomery lecture on Monday, February 8, at 4 p.m. in Hopkins Center’s Spaulding Auditorium. The free lecture is titled, “Two Works in Progress: Over the River, Project for the Arkansas River, Colorado, and The Mastaba Project for the United Arab Emirates.”

Known for her impassioned and lyrical prose, Williams’ most recent book is Finding Beauty in a Broken World, which was just published in paperback in October. In September, Williams was named to O Magazine’s first-ever Power List, described as “20 remarkable visionaries who are flexing their muscles in business and finance, politics and justice, science and the arts.” A passionate advocate for public lands, the Utah native published a hard-hitting 2008 op-ed in the Los Angeles Times that shed light on a last-minute attempt to auction oil and gas leases of “close to 400,000 acres of America’s redrock wilderness—much of it adjacent to the Arches and Canyonlands national parks and Dinosaur National Monument.” 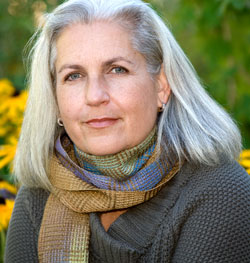 In a 2005 interview with terrain.org, Williams said of her environmental work, “Perhaps the most important qualities in protecting wildlands are patience and perseverance. We must speak in a language that opens hearts rather than closes them. And we need to build our cases for environmental protection around broad-based community concerns like health, quality of life, the protection of our watersheds and wildlife, and the total education of our children.”

Williams also wrote the acclaimed Refuge: An Unnatural History of Family and Place, which chronicled the rise of the Great Salt Lake and the flooding of the Bear River Migratory Bird Refuge at a time when her mother was struggling with ovarian cancer. The cancer was thought to caused by nuclear testing in the Nevada desert in the 1950s. Her writing has appeared in The New Yorker, The New York Times, Orion Magazine, and numerous anthologies. In 2006 she received the Wilderness Society’s highest honor given to an American citizen, the Robert Marshall Award. Williams is the Annie Clark Tanner Scholar in Environmental Humanities at the University of Utah.

The Bulgarian-born Christo and his late wife and artistic partner Jeanne-Claude, who passed away in November, have captivated the world for nearly 50 years with projects such as wrapping the Pont Neuf in Paris and the Reichstag in Berlin with polypropylene fabric. Their celebrated installation in New York’s Central Park of The Gates, a series of 7,503 vinyl gates from which billowed an equal number of saffron-colored nylon panels, was called “one of the most exciting public art projects ever put on anywhere in the world,” by New York City Mayor Michael R. Bloomberg. During its two-week run in 2005, The Gates attracted more than five million visitors.

The two works in progress that Christo will discuss during his lecture include Over the River and The Mastaba. Over the River is a horizontal suspension of 5.9 miles of luminous fabric panels over a 40-mile stretch of the Arkansas River in south-central Colorado. The Mastaba project for the United Arab Emirates is comprised of 410,000 horizontally stacked, multicolored oil barrels that will stand 492 feet high and 984 feet wide. When completed, it will be larger and taller than the largest pyramid in Giza, Egypt.

The Montgomery fellows are sponsored by the Kenneth and Harle Montgomery Endowment. Established in 1977 by Mr. and Mrs. Kenneth F. Montgomery ’25, it brings outstanding academic and non-academic persons to campus who will have an important and lasting influence on the education of Dartmouth undergraduates.