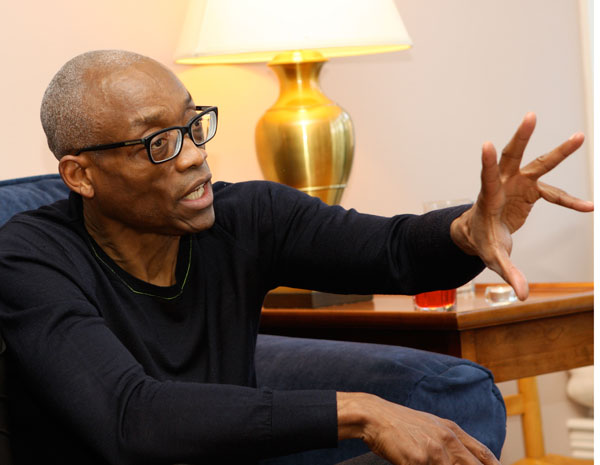 While at Dartmouth, Jones directed his company in three Hopkins Center-sponsored performances of “Fondly Do We Hope… Fervently Do We Pray,” his recent work celebrating the bicentennial of Lincoln’s birth. Jones also spent time with a number of classes and other small groups, including joining a group of East Wheelock cluster residents for dinner. Some moments from that conversation, which challenged and engaged everyone there:

On admiring Lincoln: “We all have a body. In that fact, yes, we are all created equal. But while we are all created equal, there is such a thing as greatness.” Jones recalled expecting to debunk the myth of the “great man we were all taught to admire” as he prepared “Fondly Do We Hope….” After extensive reading and research he found himself “still needing it, still engaged and—ultimately—still admiring.” Lincoln was, said Jones, “canny, imaginative, intelligent, hard working, moral, and open to examining his attitudes and to evolving these.”

What is 'black dance'? “Is it dance about 500 years of the history of a Diaspora? Or is it dance created by any person who identifies themselves as black? I believe that it is the second.” The experience of creating “Fela!”, the show about Nigerian musician Fela Kuti currently playing on Broadway, Jones noted, “made me more conscious of and attentive to the differences between ‘African’ and ‘African American.’”

Reading list: Together with his partner Bjorn Amelan (who is also the dance company’s creative director and the set designer of “Fondly Do We Hope….”) Jones “is set to read five Chinese classic novels: The Three Kingdoms, On the Water's Margin, Journey to the West, The Jing Ping Mei, and Dream of the Red Chamber”—Jones in an English translation, Amelan in French.