Former President of Bolivia Eduardo Rodríguez Veltzé, who also served as chief justice of the Bolivian Supreme Court, is in residence summer term as a Montgomery Fellow. He will deliver a public lecture, “The Rule of Law and Justice: A Latin-American Perspective,” on Tuesday, July 26, at 4:30 p.m. in Filene Auditorium, Moore Hall. Rodríguez is also teaching an undergraduate government course, “The Rule of Law: Latin America.” 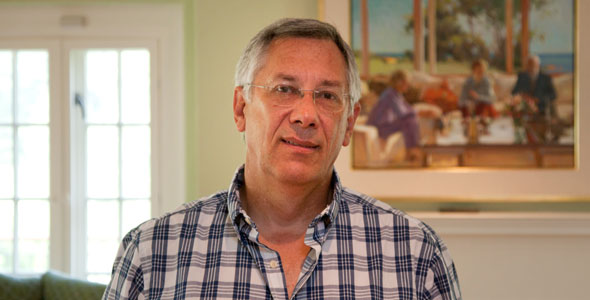 Former Bolivian President Eduardo Rodríguez Veltzé, the summer term Montgomery Fellow, is teaching an undergraduate government course, “The Rule of Law: Latin America," and will give a public lecture on July 26. (photo by Joseph Mehling ’69)

Rodríguez, who holds a degree in public administration from Harvard’s John F. Kennedy School of Government, is currently dean of the School of Law and Political Science of the Universidad Católica Boliviana in La Paz, Bolivia. As fourth in the line of succession, Rodríguez, the then-Supreme Court Justice, assumed the presidency in June 2005 following the resignations of former president Carlos Mesa as well as the presidents of the Senate and the Chamber of Deputies. He served as president until January 2006, when current President Evo Morales was elected to the post.

As Montgomery Fellows usually do, Rodríguez has also been meeting with students outside of class, visiting classes of other professors, and meeting faculty. He spoke with Dartmouth Now in July about his class, what it was like for a non-politician to suddenly be thrust into power, and the philosophical ideas in Bolivia’s new constitution.

“The Rule of Law: Latin America” (GOVT 84): “The idea of this course is to review what’s going on down there, how democracy was re-established a few decades ago, how it evolved in different ways and different countries, and how the rule of law and justice is important for each one of these countries.

“Dartmouth students are very motivated. A number of them have been to Latin America, so that provides an extra input to class to have their impressions. And a few are from other countries, so that helps to give a comprehensive view of the subject matter.”

It’s lonely at the top: “When you’re on the bench, hearing and solving cases, it’s a very structured way of doing your job because everything follows a procedure. You do it in a very peaceful environment. … Whereas when you become president, you have a wide variety of things going on at the same time and not all of them have the structured, procedural way of being presented to you. It was quite a change.

“At the judiciary I was pretty lonely at my desk, but as president I had lots of people around and lots of meetings. But at the same time, I felt more loneliness because most of the things had to be decided just by myself. The loneliness of power was very present.”

Bolivia’s constitution and the good life: “We have a new constitution. It’s very long, 412 articles. One of the philosophical ideas in this new constitution is the idea of ‘live well’ or ‘live a good life.’ That has been taken from indigenous peoples’ cultural traditions. … We’re transforming our traditional views. Human rights are not only important but also the rights of nature. We’re into this idea of ‘pachamama,’ mother Earth. It’s becoming a foundation for many politicians, that Mother Nature is as important or more important than humans. Can that be true at all? Are we complying with the rhetoric or is it just populism? What’s the difference between having options or not having any and just having the necessary, basic things you need for survival? Many say that living well or having a good life is not having more, it’s having enough. So that opens up fantastic discussions with students in class.”

Connected by technology: “It’s amazing how much technology has changed our lives. Even in the Bolivian rural areas, the poorest areas, there’s always a way to get a computer or Internet connection. We’ve got Twitter and Facebook down there and it moves ideas very fast.

“I remember coming back from a meeting with indigenous people in a rural area and I was sitting on the bus next to one of the ancient leaders of the town. He said, ‘I need you to give me a hand. I’m going downtown to La Paz to get a couple of laptops for my kids.’ Even though they were in a very rural area, with a traditional indigenous population, he said they needed computers. These children will be global, and will have access to wider horizons in terms of ideas and opportunities.”

Recommended reading: “Falling Behind: Explaining the Development Gap Between Latin America and the United States by Francis Fukuyama. It’s a series of articles written by very interesting people that tries to explain why there’s this gap between the U.S. and Latin America. I highly recommend it. The latest book by Mario Vargas Llosa is also a wonderful book, The Dream of the Celt.”

Established in 1977, Dartmouth’s Kenneth and Harle Montgomery Endowment provides for “the advancement of the academic realm of the College” in ways that enhance the educational experience, in particular that offered to undergraduate students.