Alanis Obomsawin, a Canadian filmmaker, storyteller, singer, and social activist of Abenaki descent, is in residence at Dartmouth as a fall term Montgomery Fellow. She will deliver a public lecture, “Waban-Aki People from Where the Sun Rises,” on Tuesday, November 1, at 4:30 p.m. in Filene Auditorium, Moore Hall. On Friday, November 11, Obomsawin will present her latest film, Professor Norman Cornett: “Since when do we divorce the right answer from an honest answer?”, as part of the Loew Film Series. The screening and discussion will be held at 7 p.m. in the Loew Auditorium and is free and open to the public. 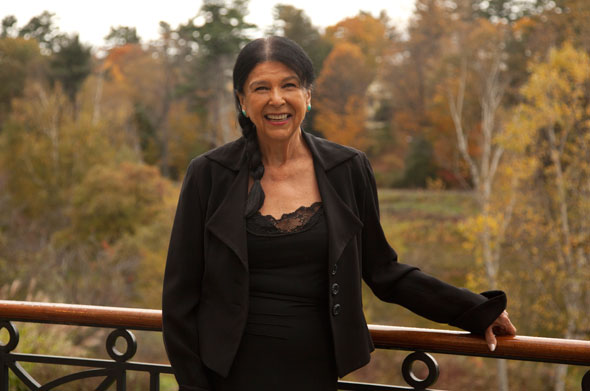 Filmmaker Alanis Obomsawin, Dartmouth’s fall term 2011 Montgomery Fellow, will give a lecture and present one of her documentary films to the public during her residency at the College. (photo by Corinne Arndt Girouard)

Born in Lebanon, N.H., and raised primarily in Quebec, Obomsawin has produced and directed more than 30 National Film Board of Canada documentaries on First Nations culture and history. Her best known documentary is Kanehsatake: 270 Years of Resistance, about the 1990 siege at Oka, Quebec. She has been awarded many international prizes for her films, and was recently made an Officer of the Order of Canada. Dartmouth Now spoke with Obomsawin in October.

You’ll be giving the first of two public presentations at Dartmouth soon.

My lecture will be about my own people. The film is about teaching, how to teach—and about a professor in Montreal who was fired from his teaching job.

In addition to your public presentations as a Montgomery Fellow, you’re meeting with many Dartmouth students and teaching a course. How has that been?

One class I’ve visited is [Samson Occom Professor of Native American Studies] Bruce Duthu’s “Indian County Today.” We watched Gene Boy Came Home, my film about a young man making the decision to go to Vietnam. It’s still very much the same: young people still have to think about how to make that decision to go to war.

My course is in film studies: “Documentary Film: Are We Listening?” Each of my students will be making short films. I’ve been moved by their proposals.

I’m so impressed with Dartmouth students—I feel so good about their thinking about the past and future, and the responsibility they take on important matters.

Education is the most important thing in my life. It’s why I do what I do.

You have been staying in Dartmouth's Montgomery House, which sits at the edge of Occom Pond. It's named for Dartmouth benefactor Samson Occom, who was a member of the Mohegan tribe and a student of the College's founder, Eleazar Wheelock.

I think about the Hood Museum show [Native American Art at Dartmouth, on view through March 11, 2012]—this is great moment at Dartmouth, to have that here—and everything else that is now here for Native students. But I do remember Occom, and the College’s original promise to educate Indian boys; I wonder if Occom felt betrayed.

Established in 1977, Dartmouth’s Kenneth and Harle Montgomery Endowment provides for “the advancement of the academic realm of the College” in ways that enhance the educational experience, in particular that offered to undergraduate students.