During his Montgomery Fellow residency in October, Emmy-winning actor Alan Alda shared his science communication insights with more than 200 undergraduates and two master classes for graduate students and faculty members. Following this introduction, Dartmouth entered into a partnership with Stony Brook University’s Alan Alda Center for Communicating Science to aid Dartmouth faculty, undergraduates, and graduate students in communicating about their research. The partnership is described in the January 2 issue of Nature. 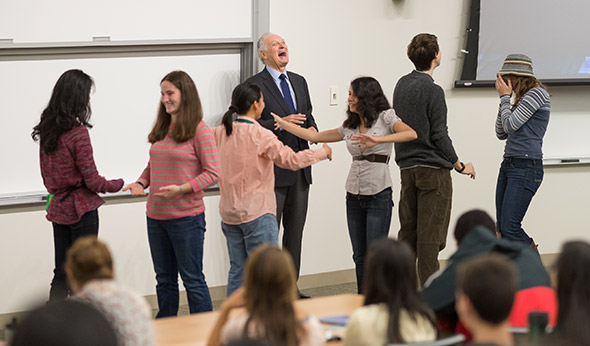 “Being able to communicate effectively about one’s scientific research is absolutely critical,” says Interim Provost Martin Wybourne. “And that message clearly resonated with faculty and graduate students during Alda’s residency.”

Alda, a visiting professor at Stony Brook’s School of Journalism, is looking forward to the collaboration. “What an exciting time we had at Dartmouth,” says Alda, who hosted PBS’s Scientific American Frontiers from 1993 to 2005 in addition to starring in M*A*S*H and The West Wing. “Whether we worked with faculty or students, the appetite for sharpening their skills and joining us in this really critical adventure was palpable. Partnering with Dartmouth is going to be a rich experience.”

Dartmouth has agreed to “collaborate and disseminate this model of teaching scientists, mathematicians, engineers, and clinicians to be more engaging and effective communicators,” says Nancy Serrell, director of Science and Technology Outreach in the Office of the Provost. “This is the beginning of what we hope will be a broader partnership, including other institutions that would also like to see these ideas used more widely.”

Serrell says Dartmouth is exploring various offerings based on Stony Brook’s science communication model, including a number of workshops. “We’ve heard from faculty interested in a workshop, and there is interest in one for postdocs,” says Serrell, a former science reporter. “So we’ll potentially start with those and are looking into modeling them on workshops similar to Stony Brook’s.”

A Dartmouth graduate course, “Communicating Science,” based on the Stony Brook model that uses improvisation techniques to help researchers engage with audiences, was taught during the 2013 fall term by Serrell, Mark McPeek, the David T. McLaughlin Distinguished Professor of Biological Sciences, Christian Kohn, a theater department lecturer, and Gifford Wong, a PhD candidate in earth sciences with a background in improvisational theater. This collaboration between Graduate Studies, the Office of the Provost, and the Department of Theater was well received, says Dean of Graduate Studies F. Jon Kull ’88.

“The students not only had a great time in the class, but they really improved their speaking and presentation skills,” says Kull, a chemistry professor who holds the Rodgers Professorship.

“Clearly, some of the most critical skills all students need involve communication, be it written or verbal,” he says. “So the collaboration with the Alan Alda Institute is a perfect fit for us, as most of our PhD students are in the sciences and communicating science is essential for our students as they go out into the world. Just look at the relatively poor understanding most Americans, or for that matter even our senators and representatives, have of science. Helping our faculty and young scientists communicate more effectively is vital.”