Two Montgomery Fellows—a diplomat and a scientist—will be on campus this term to engage the campus and the whole Dartmouth community on the theme of “Climate Change and Society.”

U.S. Ambassador to Sweden Mark Brzezinski ’87 will be in residence Feb. 14 through 17. His public lecture, “#OurSharedArctic: U.S. Embassy Sweden and Modern Diplomacy,” is scheduled for 4:30 p.m. Monday, Feb. 16, in Filene Auditorium. His wife, the blogger Natalia Brzezinski, who writes on women’s issues, will also be on campus and is scheduled to meet with students during the residency. 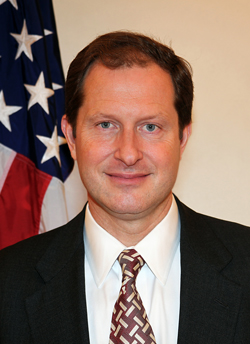 U.S. Ambassador to Sweden Mark Brzezinski ’87 will be in residence Feb. 14 through 17. (Photo courtesy of the U.S. Embassy in Sweden.)

Brzezinski has served as ambassador since 2011. In that capacity, he has developed a reputation for engaging both international policymakers and the public around issues of climate change and the Arctic—producing a series of videos for the general public, also entitled “Our Shared Arctic,” which are available on the embassy website and on YouTube. These short productions explore the science and societal impact of climate change in the North (and include a guest appearance from Dartmouth’s Institute of Arctic Studies Director Ross Virginia.)

“Ambassador Brzezinski has had a distinguished career as a diplomat, and has become directly engaged with scientists and the science of climate change,” Virginia says. “He is absolutely the perfect person to share his experience and insight—and to challenge the Dartmouth campus to engage.”

Brzezinski, who earned a JD from the University of Virginia School of Law and a doctorate from Oxford University, served as a director on the White House National Security Council during the Clinton administration. A former Fulbright Scholar in Poland, he previously served as a member of the J. William Fulbright Foreign Scholarship Board and is a member of the Council on Foreign Relations. He is the author of The Struggle for Constitutionalism in Poland and many articles on foreign policy and law. 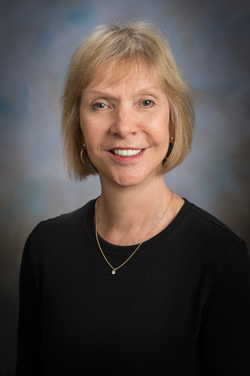 Soil ecologist Diana Wall will be in residence Feb. 28 through March 7. (Photo courtesy of Diana Wall.)

Soil ecologist Diana Wall will be in residence Feb. 28 through March 7. Her public lecture, “Soil Biodiversity in the Cold: Life in the Antarctic Dry Valleys,” is scheduled for 4:30 p.m. on Tuesday, March 3, in Filene Auditorium.

A University Distinguished Professor and the director of the School of Global Environmental Sustainability at Colorado State University, Wall studies how soil biodiversity contributes to productive soils, as well as the consequences of human activities on soil sustainability.

“Wall is one of the most distinguished ecologists in the world,” says Virginia, who has collaborated closely with Wall since the 1980s. “Her research and her leadership have created a new discipline of soil ecology, and she’s been working to help international agencies, the government, and the public understand that soils sustain life on the planet. Most of us don’t think about the fact that most of the world’s biodiversity is beneath our feet. She’s really mobilized the scientific community.”

Wall’s work includes nearly a quarter-century of research in Antarctica. She is a national associate of the National Academy of Sciences; a fellow of the American Association for the Advancement of Sciences and the Aldo Leopold Leadership Program; chair of the Scientific Advisory Committee of the Global Soil Biodiversity Initiative; and a member of the U.S. Standing Committee on Life Sciences for the Scientific Committee on Antarctic Research (SCAR). She has served as a member of the 2012 U.S. Antarctic Program Blue Ribbon Panel, a President’s Council of Advisors on Science and Technology Working Group, and the U.S. Commission of UNESCO, and is the recipient of numerous scientific awards. She has also served as president of the Ecological Society of America and the American Institute of Biological Sciences, among other societies, and was chair of the Council of Scientific Society Presidents.

Wall, like Virginia, has an Antarctic valley named after her. Of their work together, Virginia says, “Most people who have a long career in science have at least one collaborator who is the thread all the way through, and Diana is that for me and vice versa. To have her at Dartmouth as a Montgomery Fellow is an honor and a privilege, and it’s going to be a lot of fun.”

Christianne Wohlforth, director of the Montgomery Fellows Program, is enthusiastic about the residencies’ overlapping theme. “The idea was to look at different aspects of climate change and society and how they manifest in work that people do,” she says. “And so we have a soil scientist concerned with biodiversity and the ability of the planet to sustain itself. But there’s also the political dimension that Ambassador Brzezinski can speak to: How do we as a nation, in building relations with other states, manage our interests around this common issue?”

Looking ahead to the spring, Montgomery will bring celebrated British novelist Bernardine Evaristo to campus for the entire term. The award-winning author of several books, including, most recently, Mr Loverman (Penguin 2013), Evaristo is no stranger to Dartmouth; in spring 2014 she gave a reading sponsored by the English department. “She just electrified the students,” says Wohlforth. During her residency, Evaristo will teach a creative writing course.

The Montgomery endowment, which invites exceptional individuals to the College to live, work, and share their perspectives as members of the community, was established in 1977 through a gift of Kenneth ’25 and Harle Montgomery.