Novelist and poet Michael Ondaatje will read from his work at 4 p.m., on Oct. 20, in an event sponsored by Dartmouth’s Leslie Center for the Humanities. The reading will take place in room 003 in the Nelson A. Rockefeller Center for Public Policy. 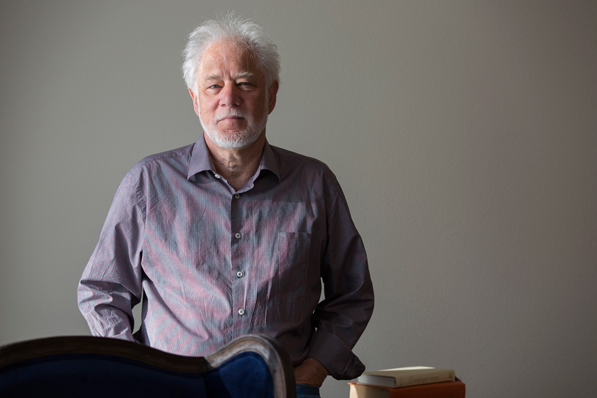 Award-winning author Michael Ondaatje will be reading at Dartmouth on Oct. 20. (Photo by Rolex-Bart Michiels)

Ondaatje’s characters are often “international bastards—born in one place and choosing to live somewhere else,” as the title character of his Booker Prize-winning novel The English Patient puts it. In that they have much in common with their author, who was born in Sri Lanka, spent his adolescence in England, and adopted Canada as his home.

In his novels, people displaced by war, heartbreak, or the search for a better life find connections that transcend borders and the bonds of family.

In The Cat’s Table, a boy travels alone by ship from Sri Lanka to England to meet a mother he hardly remembers. A young nun falls off an unfinished bridge in Toronto and into an unexpected life in In the Skin of a Lion. An American-trained forensic anthropologist returns to her native Sri Lanka to uncover atrocities of war in Anil’s Ghost. And in The English Patient, a man burned beyond recognition, his Canadian nurse, a master thief, and a Sikh soldier find temporary refuge from World War II in a burned-out Italian villa.

Ondaatje has also published more than a dozen volumes of poetry, including There’s a Trick with a Knife I’m Learning to Do, which won the Governor General’s Award, one of Canada’s highest literary honors. He is the author of a memoir, Running in the Family, and a collection of conversations with film editor Walter Murch, who edited the Academy Award-winning film adaptation of The English Patient.

Following the reading, Leslie Center Director Graziella Parati will speak with Ondaatje and then he will take questions from the audience. Ondaatje will also meet with undergraduate and graduate student members of Students for the Humanities, a new College organization, in the Leslie Center.

Students for the Humanities is part of Parati’s effort to “make the Leslie Center an intellectual home for students in the humanities.” In addition to monthly dinners and informal meetings with faculty, Parati says members will have opportunities to meet Leslie Center visitors like Ondaatje in small-group settings. She encourages anyone interested in joining the group to contact her.

Ondaatje is one of several leading literary figures scheduled to visit Dartmouth during this academic year. On Oct. 26, Salman Rushdie will be on campus to participate in a public talk that examines how fabulist tales of the East and West are relevant to modern literature. Rushdie is on a book tour following publication of his new novel, Two Years Eight Months and Twenty-Eight Nights. His visit is sponsored by the Office of the President and the Montgomery Endowment.

The Leslie Center will host Orange Prize-winner Zadie Smith on Feb. 2; former Poet Laureate of the United States Robert Pinsky on April 7; and Pulitzer Prize-winner Jhumpa Lahiri on May 16, 2016.