A Next-Day Conversation About Iowa

With only a few days remaining before Iowa holds its first-in-the-nation caucuses, presidential hopefuls are making their final push for grassroots support. At Dartmouth, the results are being closely watched by Brendan Nyhan, assistant professor of government, and Hendrik Hertzberg, a political commentator for The New Yorker. 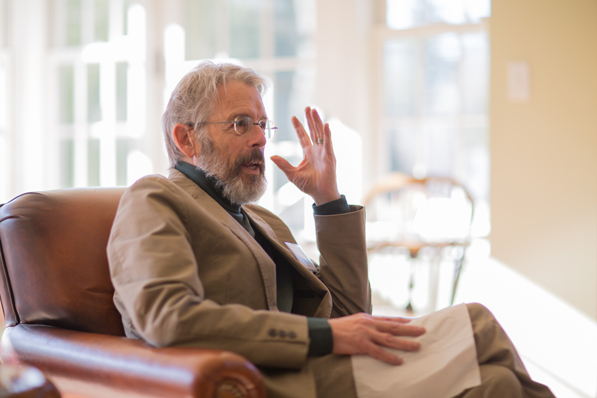 Hendrik Hertzberg will talk about the ramifications of the Iowa caucuses during a discussion Tuesday with Assistant Professor of Government Brendan Nyhan. (Photo by Robert Gill)

Hertzberg, who is spending 10 weeks on campus as a Montgomery Fellow, has been editor of The New Republic and a speechwriter for President Jimmy Carter. He is the author of ¡Obámanos! The Rise of a New Political Era (2009) and Politics: Observations & Arguments (2004). He serves on the board of FairVote, a research and advocacy organization that promotes electoral reforms, and is part-time editorial director of The Nation Institute, a nonprofit media center dedicated to strengthening the independent press and advancing social justice. He lives in Manhattan and Nyack, New York, with his wife, Virginia Cannon, a New Yorker senior editor, and their 17-year-old son, Wolf. His friends call him Rick.

“We’re delighted to welcome Rick to campus because he’s both a National Magazine Award-winning writer and an insightful liberal analyst,” Nyhan says. "We’ll be talking about the fascinating Democratic and Republican presidential primary races and what they tell us about both the state of the country and our nation’s politics.”

Nyhan and Hertzberg will analyze the results of the Iowa caucuses in a public conversation titled “What Just Happened?” at 4:30 p.m. on Feb. 2 in Filene Auditorium. They’ll answer questions from the audience after the presentation. The event is free and open to the public.

Hertzberg notes that it was his former boss, Carter, who put Iowa on the political map in 1976. “Carter recognized that this was an unnoticed part of the delegation process that preceded the New Hampshire primary and could be marketed as the beginning, rather than New Hampshire being the beginning. He made the caucuses what they are,” Hertzberg recalls.

That’s not to say that Iowa is representative of the American electorate. “It’s flawed as an indication of anything more than what a group of atypical Americans will do under conditions of extreme exposure to the candidates,” Hertzberg says.

Those candidates, especially at the edges of the political spectrum, have been upending some of his early assumptions. “I am surprised at Trump’s apparent invulnerability and how the typical political weapons just bounce off his shield. I didn’t see that coming, and I think very few people saw that coming. I don’t know of anyone, really, except maybe Trump. He has said thing after thing after thing that is supposed to be suicidal and he emerges stronger each time,” says Hertzberg.

Donald Trump, Hertzberg thinks, will win in Iowa in part because “Ted Cruz is such a repellant character.”

Unlike many pundits, Hertzberg doesn’t see Trump as a catalyst of anti-establishment anger. Rather, he says, Trump has “infantilized” the electorate. “I think a lot of people are responding to him as if they were frightened children responding to a daddy who just repeats over and over again, ‘I’ll take care of it,’” Hertzberg suggests.

On the political left, he sees Sen. Bernie Sanders as the beneficiary of a different kind of fantasy.

“Don’t get me wrong,” Hertzberg says. “Bernie’s politics are closer to mine than anyone who has ever run for president in my adult life. But I am alarmed by the fantasy of presidential omnipotence and that’s what leads over and over again to people on the left of the Democratic Party concluding that they have been betrayed by their leaders, that they didn’t get what was promised.”

Hertzberg calls Sanders a “temperamental visionary” who comes out of the “American political tradition of left-wing utopianism that has never been terribly interested in the nuts and bolts.” Hertzberg predicts a win for Sanders in Iowa and New Hampshire, but guesses the 74-year-old self-avowed “Democratic socialist” will lose the nomination to Hillary Clinton.

“Not that I have anything against social democrats in their 70s–I’m one myself,” Herzberg says. “I do wish Bernie would quit calling himself a Democratic socialist and start calling himself a social Democrat. It’s a fine point, but it’s more accurate to say he’s a social Democrat because the parties around the world that favor his politics are all called social democratic parties.”

Watching the start of primary season from Montgomery House rather than from the hubbub of Manchester or Concord—where he has previously covered campaigns—is a new experience for the veteran journalist. The Dartmouth residency is giving him time to reflect on the “underlying roots of problems that we normally attribute to bad people.”

Most of what he has written as a political commentator, Hertzberg says, has been about what he calls “good people and bad people.” Now he is more interested in “a systemic problem of perverse incentives. Politicians, like everybody else, respond to job incentives. The typical American answer is to say, ‘they’re not good because all they want to do is get elected.’ ”

But in fact, Hertzberg theorizes, the American election system leaves politicians little choice but to place their self-interest above the common good, while pretending to do the opposite.

While at Dartmouth, he hopes to do some archival research into the roots of American governance, dating back to the writing of the Constitution. His own work, he admits, has so far been taking a back seat to the many classes he has been visiting and the discussions he has been having with students and faculty at Montgomery House. “But I really enjoy those sessions,” he says.

Hertzberg says he is looking forward to talking with Nyhan on Feb. 2 about the choices Iowans made, and the way forward for the candidates remaining in the race. “I will be interested to know what I have to say about all that,” he says with a smile.