I feel like it’s my life’s mission to talk to people about their family photographs,”

The Montgomery Fellow is reimagining photo albums in the Digital Diaspora Family Reunion.

“I feel like it’s my life’s mission to talk to people about their family photographs,” says Montgomery Fellow Thomas Allen Harris.

Since 2008, the celebrated filmmaker has been doing just that, through a project called Digital Diaspora Family Reunion—roadshow-style events where people share family photos and the stories they hold. The project is transmedia—that is, it crosses artistic platforms of film, photography, and digital media, and includes a vibrant online and social media community, including a growing public Facebook group.

“We’ve interviewed over 1,200 people about their family photographic albums over the last eight years,” Harris says. “This is an alternative way of thinking of the family album in the digital age. It’s a way to encourage people to see one another less in terms of race, gender, orientation, nationality, or religion, but as family members.”

The Digital Diaspora project has grown most directly out of Harris’ recent film, Through a Lens Darkly, which is showing at Loew Auditorium on May 5 at 7 p.m. 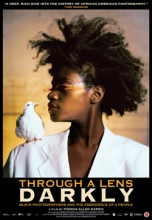 A finalist for the 2016 Peabody Award, Through a Lens Darkly explores the work of African American photographers and the ways African Americans have been represented—and have represented themselves—from the mid-19th century to the present. The project, inspired by the work of photographer and scholar Deborah Willis, took Harris 10 years to create.

“The film is kind of an essay that talks about this war of images within the American family album,” Harris says. “I wanted to make something that would compassionately inspire another generation to think about this idea of a family album in terms of race and representation and beauty and pain.”

Harris had long wanted to develop a community outreach project in conjunction with his films, and Through a Lens seemed to demand it. “Initially it was going to be more closely aligned with the film as we defined it then,” he says. “Instead, people asked us to do it live. So it became this kind of roadshow, and it just grew from there. Doing Digital Diaspora made me realize the extent to which the family album is a kind of strategy to talk about this disparate history, to make it a cohesive narrative, bringing in my personal narrative as well.”

The Digital Diaspora is a natural evolution of Harris’ work. “All of my films have my family archive in them, and they’ve all led me to find other images and other archives,” he says. “As I traveled around the world, people would say to me, ‘I have this family archive, I want to do something to transform it from this inert thing in a box or on a shelf or attic or storage.’ Suddenly it has use and purpose.”

The project has taken off at a moment when technology is changing the concept of the family album, Harris says. “The family albums that you and I grew up with were really curated. There was a narrative that was created by someone, often multi-generationally. It’s interesting how students have 5,000 images on their phones, but how many are really important? How do we somehow curate those and keep them from getting lost?”

As a Montgomery Fellow this term, Harris has been visiting classes, hosting dinners at the Montgomery House, and setting up cameras around campus where students and faculty have been bringing their family photos and telling their stories.

The Montgomery endowment, which invites individuals to the College to live, work, and share their perspectives as members of the community, was established in 1977 through a gift of Kenneth ’25 and Harle Montgomery.

Harris’s residency will culminate with a “grand finale,” free and open to the public, featuring live music, storytelling, and family photos projected on the big screen, at 7 p.m., May 9, in Dartmouth Hall room 105. Everyone is welcome to bring photos and participate, Harris says. “I’m interested in what stories are going to come out—Dartmouth stories, stories of this region, which is both local and international because of the nature of this institution. It’s going to be fun.”

“It’s a really liberating experience to talk about one’s family photograph as a text, and see it have value beyond the sentimental. It connects the family narrative with the public record, with history as we’re making it now or as our ancestors made it,” says Harris—especially for members of communities that haven’t always been part of the dominant narrative. Harris, African American, describes himself as belonging to a “large diaspora” dispersed across the United States, Europe, Brazil, and South Africa, and identifies as a member of the LGBT community.

Harris spent part of his childhood in Tanzania, where his stepfather, a member of the African National Congress, was in exile from apartheid rule in South Africa—as Harris describes in his 2005 film, Twelve Disciples of Nelson Mandela.

“I was inspired by the idea of truth and reconciliation that was very prominent in the healing that is still going on in South Africa,” he says. “We’ve never really had that kind of reckoning. So this is in some ways a visual reckoning.”

As for what the Dartmouth community can expect from the event, Harris says, “Each roadshow is different. It transforms the way people think about their family narrative, around their connection to people who don’t look like them. This anchors our sense of humanity. It becomes a sacred space.”