Romila Thapar is an Indian historian and a leading scholar on ancient India. She is currently Professor Emerita in History at Jawaharlal Nehru University but has served as a visiting professor at a number of academic institutions around the world including London University, Cornell University, the University of Pennsylvania, and the College de France in Paris. During her career, Thapar has produced over fifteen volumes including The Penguin History of Early India: From the Origins to A.D. 1300, Asoka and the Decline of the Mauryas, and Ancient Indian Social History: Some Interpretations.

In recognition of her scholarship, Thapar has earned numerous awards. In 1983, she was elected general president of the Indian History Congress, and in 1999, was named a corresponding fellow of the British Academy. She was the first holder of the Kluge Chair in Countries and Cultures of the South at the John W. Kluge Center of the Library of Congress, and she is an honorary fellow of Lady Margaret Hall, Oxford University. in 2008, Thapar received the Kluge Prize for the study of Humanity, which is a lifetime achievement award given to celebrate the importance of the intellectual arts for the public interest.

During her time as a Montgomery Fellow, Thapar taught a course in the History Department titled “The Perception of the Past in Early India” as part of a two course series titled Reimagining India. She also delivered a lecture: “Interpretations of Early Indian History” and engaged with students and faculty in a number of more casual settings around campus. 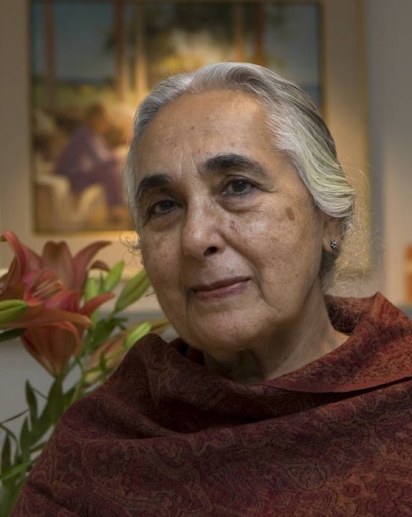