Russell Baker is an American journalist, essayist, and author. He wrote the "Observer" column for The New York Times and received the Pulitzer Prize for distinguished commentary in 1979. He won his second Pulitzer for his autobiography, Growing Up. Former host of Masterpiece Theatre, Russell Baker is a member of the American Academy of Arts and Letters. In addition to his work with The New York Times, Baker contributed to other publications like Sports Illustrated, the Saturday Evening Post, and McCalls. In addition to Growing Up, Baker has authored or edited several books including The Good Times, No Cause for Panic, and Poor Russell’s Almanac.

Baker joined Dartmouth as a Montgomery Fellow during the build up to the 2004 presidential election as part of the series, “Presidential Politics.” For his part, Baker delivered a lecture titled, “The Decline and Fall of Politics and Practically Everything Else,” and engaged with students and faculty leading up to the election. 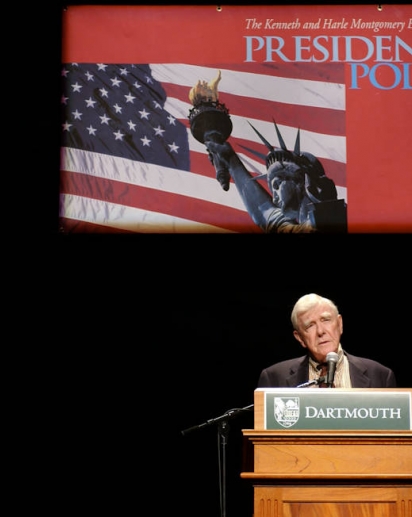