Sir Malcolm Grant is a lawyer and academic who has dedicated his life to public service. Grant came to the UK from New Zealand as a lecturer at the University of Southampton and then became Professor of Law at University College London (UCL). He was appointed in 1991 as Professor and Head of Department of Land Economy at the University of Cambridge and a fellow of Clare College. His academic interests were in planning law, environmental law and property law. Grant is the author of several books and articles, and for 22 years was the editor of the 8-volume Encyclopaedia of Planning Law and Practice, of which he remains still the Consultant Editor.

In recognition of his academic work, Grant was elected an Honorary Member of both the Royal Town Planning Institute and the Royal Institution of Chartered Surveyors and was appointed Commander of the Order of the British Empire (CBE) for his services to planning and local government. He is a barrister by profession, and a member of the Bench of Middle Temple. He was subsequently appointed Pro-Vice-Chancellor of Cambridge, and then returned to UCL as its President and Provost in 2003 where he completed a ten-year term of office. During that period, UCL emerged as one of the world’s leading research-intensive universities, regularly ranked amongst the top twenty in the world, and for each of the last three years has held fourth place in the QS World University Rankings. In 2013, Grant was knighted for his services to higher education.

Grant has also had an extensive career in public service. For six years, he served as the Chairman of the Local Government Commission for England, and for five years, the Chairman of the UK Government’s Agriculture and Environment Biotechnology Commission. He has chaired the Russell Group of the leading UK research universities and was for four years a member of the Board of Directors of the League of European Research universities. He is a Prime Ministerial appointee as a British Business Ambassador. He is a Board Member of the Higher Education Funding Council for England, the University Grants Committee of Hong Kong, and the International Council on Global Competitiveness of Russian Universities, of the Russian Federation, and is President of the Council for At-Risk Academics (CARA).

In 2011, Grant was appointed as the inaugural Chairman of NHS England, a new independent body established by Parliament to manage the National Health Service in England. NHS England commissions healthcare for a population of 55 million people, and holds an annual budget approaching £100 billion, with responsibility to deliver significant long-term improvements in health outcomes and the quality of healthcare in England.

Regarding Grant’s visit to Dartmouth, former Montgomery Fellowships Program director Christianne Wohlforth remarked, “Sir Malcolm Grant brings authentic, hands-on experience leading large nonprofits through difficult change. He is an expert in the management of public resources, has tackled reform in two of the trickiest bureaucracies ever—education and health care—and offers a context usefully different from our own.” During his time on campus, Grant delivered a lecture titled “The Impossible Challenge? Providing High Quality Healthcare for Entire Populations.” He also met with undergraduates, graduate students, faculty members, and researchers, as well as with College and Dartmouth-Hitchcock Medical Center administrators for discussions on topics like climate change and health care needs. 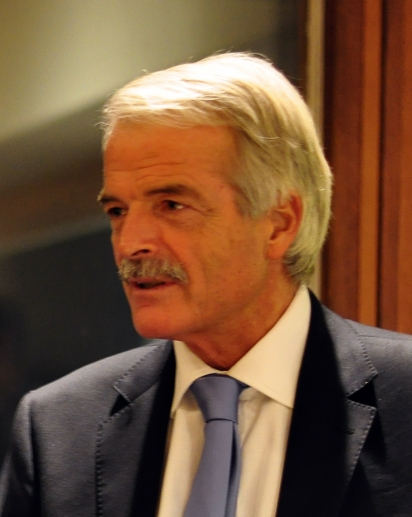