Wangari Maathai was a renowned environmentalist, political activist, and writer, best known as a leading environmentalist of Africa and the developing world in general. She was a founding member of the Green Belt Movement in Kenya, an environmental initiative of reforestation designed to stop oil erosion, provide cheap and available fuel, to employ and empower Kenya's rural workers who are, almost exclusively, women. In addition, she was a strong vocal activist for civil rights, the rule of law, free speech and public political responsibility. For her life’s efforts, Maathai received the Nobel Peace Prize in 2004 and became the first Africa woman and environmentalist to win the award. She has received numerous other honors and awards including a United Nations Environmental Program Global 500 award, San Francisco’s Goldman Environmental Prize, the Hunger Project’s Africa Prize for Leadership in London, and the Right Livelihood Award. Earlier in her career, Maathai became the first Eastern African woman to earn a PhD from the University of Nairobi, and taught for a number of years there, eventually becoming chair of the Department of Veterinary Anatomy. In addition to her teaching, Maathai belonged to the Kenya Red Cross Society, the Kenya Association of University Women, the Environmental Liason Centre, and the National Council of Women in Kenya where she focused on women’s rights and combating environmental degradation. Maathai published a number of works during his lifetime, including Replenishing the Earth: Spiritual Values for Healing Ourselves and the World, Rainwater Harvesting, The Challenge for Africa, and Unbowed: A Memoir. 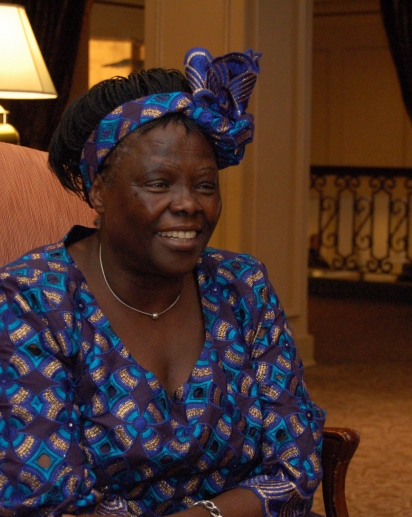