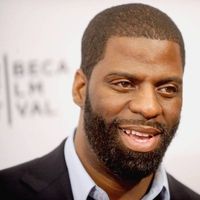 ~~Driven by his motto, "true power is the power to empower others," Che "Rhymefest" Smith is a writer, artist, political organizer and teacher, shattering negative stereotypes about hip-hop and establishing himself as a positive role model.
In 2005, Rhymefest won a Grammy for co-writing the mega-hit "Jesus Walks" with his childhood friend, Kanye West. In 2006, he released his critically acclaimed "Blue Collar" album and shortly after that, became the first rapper to meet in the British House of Commons when David Cameron invited him to discuss hip-hop and policy.
A dedicated community leader, social and political organizer, Rhymefest ran for Chicago’s City Council in one of the city’s most violent neighborhoods in 2011, and after pushing the incumbent into a run-off and defeating four candidates, he lost by a narrow margin. In 2013, Rhymefest, together with his wife, founded Donda's House, a non-profit that provides artist & youth development. Donda's House has served over 500 youth with free arts instruction and continues to be a force for creative change.
In 2015, he won a Critics Choice award, Golden Globe and Academy Award for "Glory", his collaboration with John Legend and Common for the film, Selma. Also in 2015, Rhymefest added model to his impressive resume, when Kenneth Cole selected him to be featured in his “Courageous Class” campaign. Che earned his second Grammy for his work on “Glory” in 2016.
In the Fall of 2016, Che was selected as one of Chicago Magazine’s Chicagoans of the Year. Che stars alongside Alec Baldwin, Taylor Shilling, and more in the Emilio Estevez Directed film The Public. Recently, Che launched his international work by joining the Abolition Institute and Donda’s House on a historic mission to West Africa to explore and eradicate slavery in the region. Che believes that the arts, and in particular music, can be used to address, explore and uplift human rights issues globally. Additionally, Che is slated to release a new musical project in collaboration with DJ Jazzy Jeff.