Intersectionality in the Age of Populism 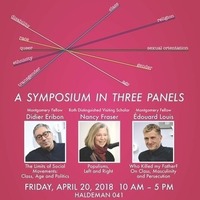 ~~The “March for Our Lives” protests in Washington, DC and most major cities in the United States and around the world on March 24, 2018 were one of the many culminating moments after populist President Donald Trump’s first year in office. The shooting massacre at Marjory Stoneman Douglas high school in Parkland, Florida, was the catalyst for these protests, which, in conjunction with several other events, such as the violence against anti-alt-right and anti-white-nationalist protesters in Charlottesville, Virginia, have revealed a fervent “intersectional” opposition to the President’s essentially white, populist political agenda. The #neveragain movement has united young students from diverse classes and ethnic backgrounds in their resistance to the political influence of the National Rifle Association. The recent verdict in the Alton Sterling case in Baton Rouge, Louisiana, in which two white officers were acquitted of shooting a handcuffed black man, is the latest in a series of police shootings of mostly unarmed black men, and along with the #timesup and #metoo movements, has added fuel to the multi-faceted opposition to the structures of power that discriminate against a wide range of people from distinct categories: women, ethnic minorities, the LGBTQ community, the working class, the handicapped, etc. While the concept of “intersectionality” was invented by women of color who protested against feminism’s almost exclusive focus on the oppression of white women and its elision of the differences existing among women from diverse ethnic communities, the term has come to refer to the ways in which race, class, gender, sexuality and other factors work together in the discrimination against marginalized social groups.
The two Montgomery Fellows at Dartmouth this spring, Édouard Louis and Didier Eribon, have written extensively about problems of class discrimination, sexual violence, racism, and the rise of right-wing populism in Europe. Their presence on campus, as well as Nancy Fraser residency as a Roth Distinguished Visiting Scholar, motivated the organization of this colloquium, which hopes to spur lively discussions among its participants, students, faculty and the public at large regarding the key issues that triggered the increasingly committed “intersectional” responses to the growth of right wing nationalism and populist parties in diverse contexts.