A rousing reflection by the peerless comedian and social critic. A special event for Dartmouth students, faculty, staff, and Hop members. 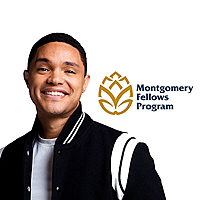 This event is open to Hop Members and Dartmouth students, faculty and staff, so log in to RSVP.

Trevor Noah, host of Comedy Central's Emmy- and Peabody Award-winning The Daily Show, joins us for a casual conversation on this moment of adversity and possibility. Noah reflects on the state of our nation and discusses how our Dartmouth community can, in spite of isolation, come together around the arts, pursue racial justice and rise to the challenge of this moment. Steve Swayne, Director of the Montgomery Program, moderates the discussion with timely questions submitted by students from Dartmouth’s house communities.

Born in South Africa to a Black South African mother and a white European father during apartheid, Noah knows what it means to live in a divided nation. He persevered through extreme poverty and social turmoil to become one of the most sought-after comedians and political commentators.

Noah has hosted numerous television shows including South Africa's music, television and film awards, and two seasons of his own late-night talk show, Tonight with Trevor Noah. Noah recently debuted his ninth new Netflix comedy special Afraid of the Dark and his Comedy Central stand-up special Trevor Noah: Lost in Translation, and he won MTV's "Personality of the Year" in 2015.

His first book and New York Times bestseller Born a Crime: Stories from a South African Childhood is an intimate look at his upbringing and the world that shaped him. His performance and "gift for vocal impersonation" (The Washington Post) on the Born a Crime audiobook helped make it Audible's highest-rated audiobook of 2016. It was also nominated for two NAACP Image Awards, one for Outstanding Literary Work by a Debut Author and another for Outstanding Literary Work in the Biography/Auto-Biography category.